I head out to Yellow River Park for a walk/run on the trail. During my w/r I discuss my goal for the Peachtree Road Race, mention a few of the podcasts that I listen to, and of course complain about my foot some more.

The next day I decide it may be a good idea to start another training plan so I can do Peachtree without suffering aerobic distress.

The intro and outro music is from Digital Juice, the intro is “Hardwired” and the outro is “ComingDown.”

This podcast was recorded using a Zoom H2 Handy Recorder.

LostTrailRunner II Podcast is licensed under a Creative Commons Attribution-Share Alike 3.0 United States License.
Posted by LostTrailRunner at 18:40 No comments: Links to this post

Today I went back to my foot Doctor, I was kind of down because my foot had started hurting again and I was just wanting to run again with no pain.
Perry Julien is my foot doctor and he is probably one of the best there is, I lifted the following from the Atlanta Foot & Ankle Center website, I hope they don’t mind.

For the 1996 Summer Olympic Games Dr. Julien was chosen to coordinate podiatry services in the Olympic Village Polyclinic and to serve as medical administrator for the Olympic Marathons and Racewalks. He is the co-medical director for the Peachtree Road Race and Atlanta Marathon and was also the medical coordinator for the Women’s United Soccer Association (WUSA) and assistant team physician for the Atlanta Beat. He is currently the team podiatrist for the Atlanta Thrashers professional hockey team and the Atlanta Falcons professional football team as well as consulting podiatrist for several Georgia collegiate athletic programs.

To say the least, I trust his opinion on my foot. He adjusted my orthotics today and gave me a prescription for an anti-inflammatory gel. I have another appointment in about 4 weeks, we will see how it goes.

I told him I wanted to run Peachtree this year and he said that he saw no reason that I couldn’t, which was good news.
Just Keep Moving!
Posted by LostTrailRunner at 20:24 No comments: Links to this post

You can now hear my shows while on the go with Stitcher SmartRadio.
On demand News, Talk and More on your mobile phone.
The latest episode is always available for you- no syncing needed… and no memory or storage wasted!
Available for your iPhone, , Android phones, WebOS phones  or your BlackBerry.
Downloading is easy, go to Stitcher.com  or check out your app store. Stitcher SmartRadio- The Smarter Way to listen to radio
Posted by LostTrailRunner at 19:28 No comments: Links to this post

Rainy Day on the Trail 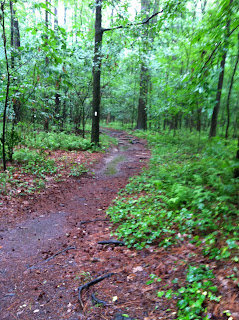 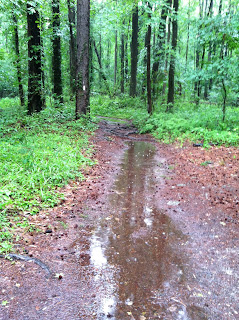 I parked over at the Picnic area at Stone Mountain then headed out on the trail toward Indian Island. I was running out for 17:30 then turning around for a short run today. When I started running it had stopped raining so I thought I would have a nice easy run on a somewhat wet trail.
Of course as I turned around at the 17:30 mark, the bottom fell out and it poured all the way back. It is funny how the weather actually knows when I am at the farthest point out so it can rain on me all the way back, then slack off just after I finish.
Still had a very good outing today, haven’t run in the rain in some time. Felt good.


Just Keep Moving!
Posted by LostTrailRunner at 19:13 No comments: Links to this post 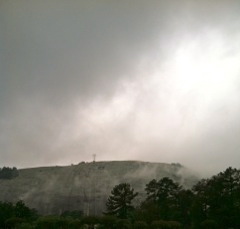 Went out to Stone Mountain this afternoon for a run on the trail. Rainy, overcast day, here is a shot of the mountain from the Skylift parking lot.

Just Keep Moving!
Posted by LostTrailRunner at 19:05 No comments: Links to this post

Posted by LostTrailRunner at 11:29 No comments: Links to this post

Any donations towards my Podcast hosting costs are gratefully appreciated.