Podcast Show Notes:
I start the podcast with an update and feedback from Carlos the Running Jackal. Carlos used my new Skype voicemail and it seemed to work well.
I then have my 1st workout corner. I go over Jeff Galloway's "Magic Mile" work out. Then I tell you how I do the workout.
Jeff Galloway: Galloway's 5K and 10K Running
Oxford: Meyer & Meyer Sport (UK) Ltd., 2007
ISBN 978-1-84126-219-2 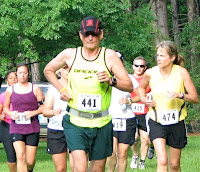 Music: "Fog in the Caribbean" by Gabo from the album "Somewhere between the Beach & the Sea"
The music provided is from Mevio's Music Alley. Check it out at 'music.mevio.com'"
My account of the XTERRA Deep South 15K Trail Race.
e-mail feedback from Tim (virtual4now) and Tim C. plus a  Skype message from Samantha.
My intro and outro music is from DigitalJuice, the intro is "ChasingTheSun" and the outro is "ComingDown".
Digitaljuice.com
This podcast was recorded using a Zoom H2 Handy Recorder with a Giant Squid podcasting microphone.
twitter:  www.twitter.com/losttrailrunner
e-mail ID: losttrailrunner@gmail.com
Skype voicemail:  losttrailrunner
Call in number:  206.426.0732
LostTrailRunner Podcast by Ron Keyes is licensed under a Creative Commons Attribution-Share Alike 3.0 United States License.
Posted by LostTrailRunner at 23:14 No comments: Links to this post 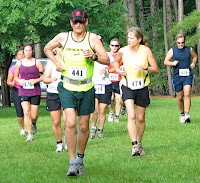 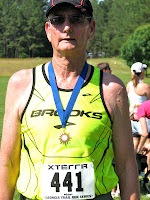 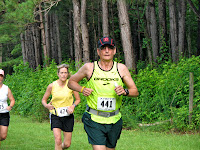 Having injured the big toe on my right foot, I was really doubtful that I would be able to compete on Saturday morning. I decided to go ahead and get my gear rounded up to be ready for the morning, just in case. I would wake up early and decide then if I would go to the race.

I asked Rhonda (my wife) if she wanted to ride down to Dauset Trails with me in the morning. She said she would, which was great because she seldom goes to races with me. That was really when I decided for sure to go to the race. My logic was we could go to Dauset Trails and I would run around a little to see how my foot felt and if it didn't hurt to bad I would go ahead and run the race. If it hurt to much then we would just have a day out together.

We arrived at Dauset Trails about 7:30 am and I picked up my race number and goody bag, then went for a short run on the nature trail. My toe seemed to be ok it was tender, but didn't really hurt. I decided to line up and start the race. I got in the back of the pack at the start of the race because I was going to start slow and see how things developed. I had my shoe laces tied really tight so my foot wouldn't slide forward in my shoe.

I Started the race slowly and found that I felt really good and my foot wasn't bothering me. After about a 1/2 mile we turned into the woods on the trail. I was very aware of each root, rock and stump on the trail, each was an enemy of my big toe. There were water stops at around 2, 4 and 7.4 miles.

I had decided to run to the 1st water stop then start doing a run 3/walk 1 pattern for the duration of the race. As I approached the 1st water stop I decided to take water and continue running to the 4 mile water stop before I started the 3/1 pattern. I was feeling really good. When I reached 4 miles I was still feeling good, but I decided to go to 3/1 so I would not burn out before the finish. That was a very good decision on my part. Between 4 miles and 8 miles I started passing people and very few of them came back on me during my walk sections.

This is the 3rd year that I have run this race and I really like the course, it has a little bit of everything - uphills, downhills, technical and very easy trail sections. According to my Garmin 305 there was 3250 feet of ascent and 3367 feet of descent, so there was a lot of up and down.

Everything was going great in the race until about the 8 mile mark. At that point I stubbed my toe again, it took my breath away. I didn't fall, but it brought tears to my eyes. I managed to keep running and slowly the pain lessened. I think it was just a matter of losing concentration near the end of the run. I was thinking about only having a little over a mile left and wasn't focusing on the trail like I had been previously.

Next at about 8.5 miles I started to get a cramp in my left shin. I have never had a cramp there before. I found as long as I kept running it wasn't as bad as when I walked. Fortunately the cramp was at the end of the race so I was able to just keep moving and finish the race.

As it turns out I ended up finishing 1st in my age group, so the sore toe and the cramps weren't such a big deal after all.
How soon we forget the pain and are ready to race again.

Rhonda too some great photos during the race, of which I have posted some.

Just Keep Moving!
Posted by LostTrailRunner at 16:16 No comments: Links to this post 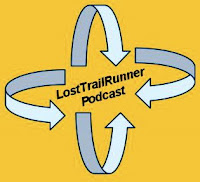 Podcast Show Notes:
Went over to Mountain Park Park to give my injured toe a test run to see if I would be able to compete in the XTERRA Trail Race this weekend.
Did a R1/W1 workout for 2 miles to see how the toe felt.
While I was testing my toe I did my usual rambling on about various things. Hope you enjoy my very easy and slow workout.
I have listed below the links to blogs I mentioned during my rambling.
http://run4fun2.blogspot.com/
http://blog.262quest.com/
Music from DigitalJuice:  "The Path"
Feedback from Samantha and Mike, love getting feedback.
My intro and outro music is from DigitalJuice, the intro is "ChasingTheSun" and the outro is "ComingDown".
Digitaljuice.com
This podcast was recorded using an 8G iPod Nano  with a Giant Squid podcasting microphone.

Met up on Memorial Day morning with Mark (@bamarunner) Samantha (@SamanthaUF) Javi (@aReyoUiN) and Tim (@virtual4now) for a tweetup trail run at Stone Mountain. Good run on the trail, hope you can hear some of it. It was a challenge to record five people running trails. I recorded a while during the run and then after the run as we were standing around talking. I hope you enjoy our tweetup.

Tim (@virtual4now) has a great blog post on his blog check to out at  http://blog.262quest.com

My intro and outro music is from DigitalJuice, the intro is "ChasingTheSun" and the outro is "ComingDown".

This podcast was recorded using a 32G iPod Touch with a Giant Squid podcasting microphone.

Any donations towards my Podcast hosting costs are gratefully appreciated.